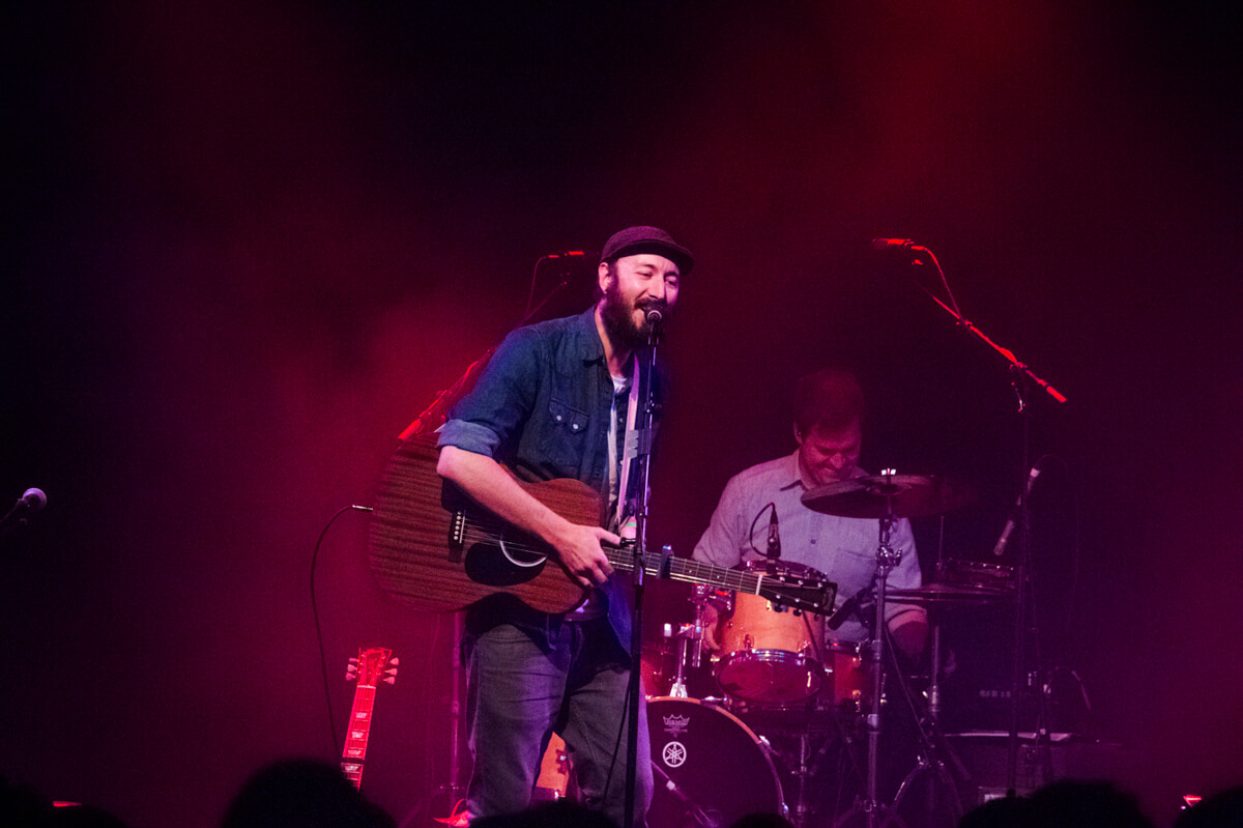 Dave Baxter aka Avalanche City embarks on his biggest national tour to date with the Little Fire tour – a ten date gig route around New Zealand’s hotspots. And tonight at Auckland’s Powerstation he graced the stage with his uplifting taste of folk songs from both last years We Are For The Wild Places and 2011’s Our New Life Above Ground.

From the get go, the mix was excellent; the levels weren’t too overpowering, and Dave’s soft voice was still soaring above all other instruments from his backing band throughout the set. For this kind of genre, the mix is particularly crucial and the sound guy this evening was on point.

The crowd at the Avalanche City’s first headlining gig at the Powerstation was a little sparse, and the weather outside was bitterly cold, but that did nothing to dampen the mood. Audience members of all ages were either completely throwing their inhibitions out the window with the kind of dance moves one would usually save for the private bedroom jam-out, or were in a constant bopping sway – the kind of movement that would take you back to a fifth form ball slow dance. The amount of couples and chemistry in the crowd could have been as equally nostalgic of a high school ball to be fair – couples arm in arm were everywhere, Love Love Love was in the air. Perhaps Dave Baxter is New Zealand’s own folky Barry White… or perhaps he is just a folkin’ warm fuzzies wizard.

Dave, very similar to Temper Trap’s Dougy with his openness to talk about his songs to the audience, shared plenty of treasures behind his works throughout tonight’s set. I mean who knew The Silence – a beautiful, swooning track – was possibly a retaliation to the growing popularity of ‘Click-Bait’. He was apparently so sick of seeing the articles like “top ten ways to get rich now” or “What billionaires don’t want you to know” which, to be honest, aren’t we all? But it gave him the inspiration to write The Silence, so I guess click-bait can’t be all bad then huh? “Cause all my life I’ve heard of the dreams of the organised, to be the best in the company, to win the awards but that’s not me.” 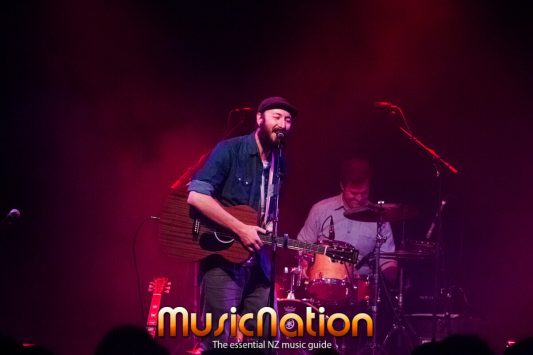 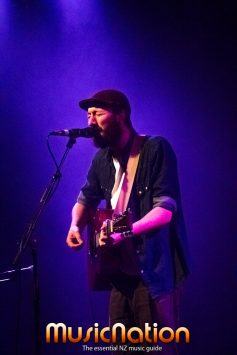 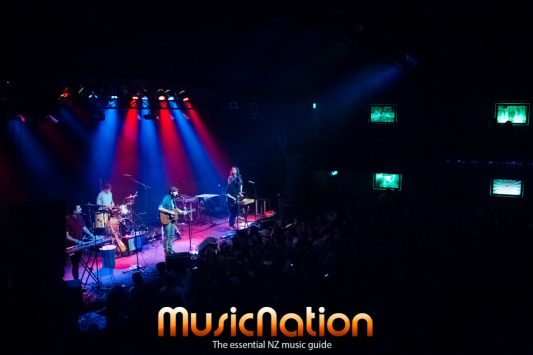 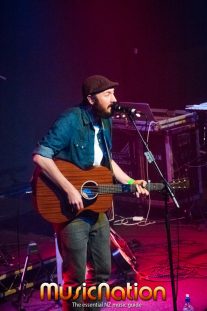 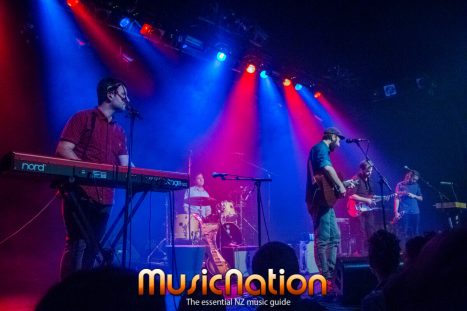 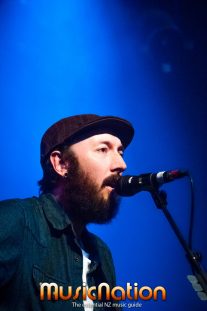 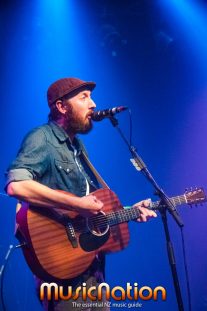 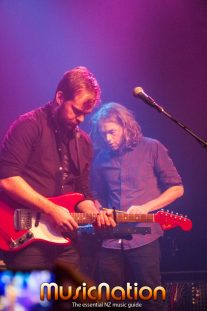 Now Avalanche City’s music is this warm, driving and often uplifting but the vibe I got from the musicians on stage was a bit stale to begin with. The keyboardist had the tendency to be glued to one position, with the guitarist often looking down at his fretboard or the floor, not to mention the trumpet/percussion player who showed little enjoyment in the job at hand, though, give that man a solo and he is thoroughly engrossed! I would have liked to see more of this kind of passion during the night. But on a sound note, Dave’s voice was totally chill and with an un-pushed tone, and the trumpet player’s sound was ultra-creamy, and Dave credited his band members at every chance he got.

Before they started Wild Places, drummer Jono abandoned his kit to stand at the front of the stage with the rest of the band. “This has got a clapping part for you guys and my lovely assistant Jono is here to help you”. He took centre stage as Dave took a seat. This drummer-come-clap-assistant was excellent, although a simple task, he was overly into it, taking on this new role with cheek, over-exaggerated expressions, and the kind of humour that made the crowd feel good for joining in.

…and this next story is my absolute favourite of the night. Dave told us how Drive On turned out to be some 3-year old’s favourite song of all time. I mean this kid couldn’t get in the car without it, or go to bed without hearing it. So this one time, said 3-year old was listening to the song in the car and was so excited waiting for the lyric “Throwing our cell phones out of the window ” that he grabbed his teddy bear and through it out the window, forcing his parents to drive back and get it. A story that received many “AWWWW’s” and chuckles as you can imagine.

Dave brought out his Gibson Les Paul for Inside Out and within the first few notes, he played the crowd was screaming out in recognition, and teens were totally grooving out on the balconies. There is a reason this track is such a hit! Harmonies, groove and trumpet lines make for a way powerful sound. Love love love had a banjo/ukulele thing, who knew! Its sound was a little abrasive, but the crowd was singing away so I don’t think they were too miffed about the banjos clucky miniature.

Dave told us about how You and I was (unsurprisingly) about a relationship, though required a little disclaimer before they could continue. “I didn’t actually build her a tree house” Dave confessed, as the song states “I would build the finest tree house for our new life above the ground…she says I lied to her through song.”

Now apparently Avalanche City aren’t the encore type, but Dave ensured the crowd he would be down by the merchandise stand after the show saying he would “love to meet you and thank you all personally for coming to the show”. So kudos for the honesty and also being so open and involved with your fans.

Playing guitar for the last decade, Jessie got all jazzed up at Auckland Uni with a Bachelor of Music, and is currently writing and performing for Auckland's All-girl Alt-Rock band She Loves You. Passionate about all things music, she is very supportive of local acts and larger groups alike, dabbles in musical theater and likes nothing more than going full hermit with fresh new albums and olden goldies.