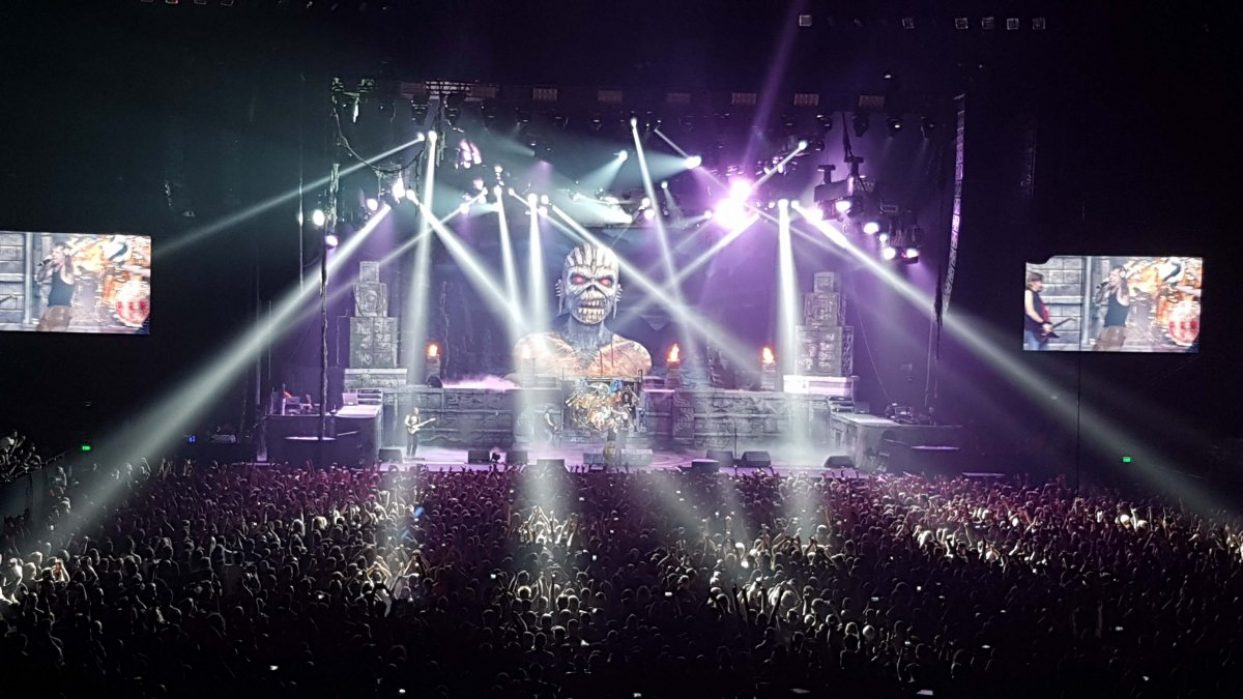 Who didn’t get into Maiden as teen? Iron Maiden are to Heavy Metal what Prince is to R&B. While some of us at school were sporting “choose Life” tees, a handful (including my teen-self) were indulging the new wave of avant-garde metal. British bands like Torme, Raven & perennial favourites like Motörhead & Iron Maiden leading the pack.

Singer Bruce Dickinson was looking very un-metal in hoodie & cargo pants, his characteristic boom, almost operatic in fine form considering his brush with throat cancer last year, as he remarked to the audience “Unbelievable to be back here in New Zealand. What a f**king great place”

Starting off with songs from their latest album The Book of Souls, the band wasted no time launching into If Eternity Should Fail and the faster paced Speed of Light from the new album, while the vocal crowd intermittently raised the obligatory fist in the air. Bassist Steve Harris looked remarkably preserved as I remember from my youth, assuming the ‘rock’ position with one leg on the speaker wedge. Drummer Nicko McBrain dominating the air space with his powerhouse drumming while Dickinson ran around the stage like a man possessed by rabies before stopping to address the packed out Vector: “It’s all downhill from here, aye? Auckland welcome”

The recognisable acoustic intro of Children of the Damned fired up the keen Auckland crowd as Dickinson addressed the audience of mostly ‘legacy’ faces “Not many people were born when this next song was written”. The Mayan-themed set reminded me of a f**ked up version of the Temple Run game, with pyrotechnics and crazy lighting, it would be the envy of any world-touring band. Its effectiveness timed with precision adding to the theatrics. 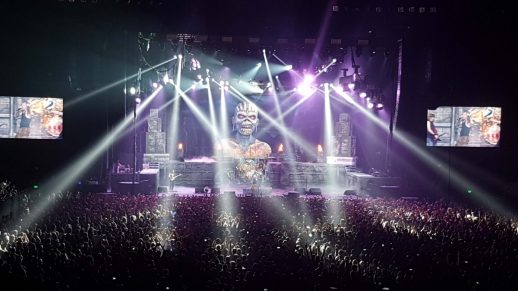 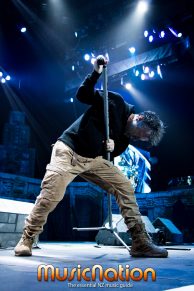 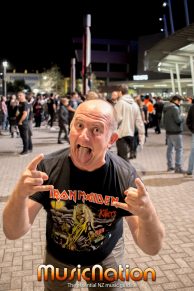 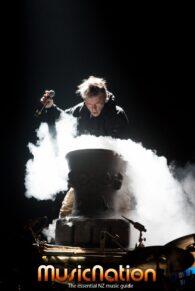 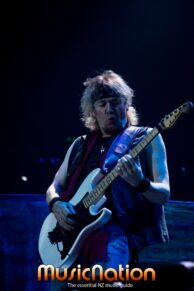 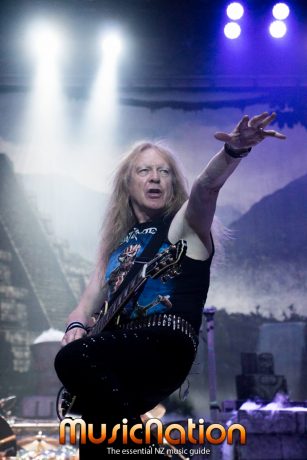 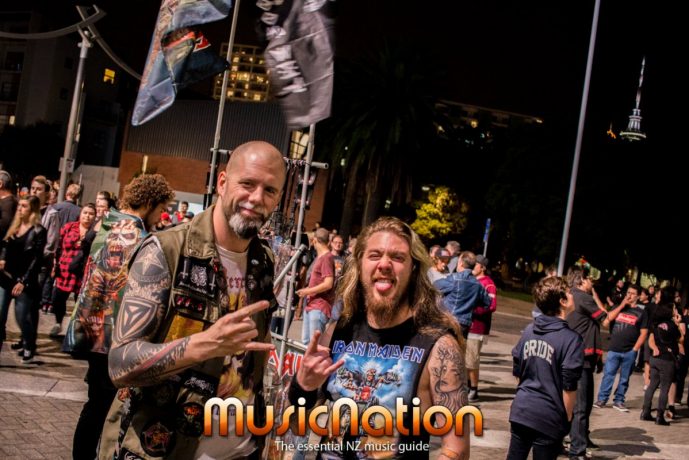 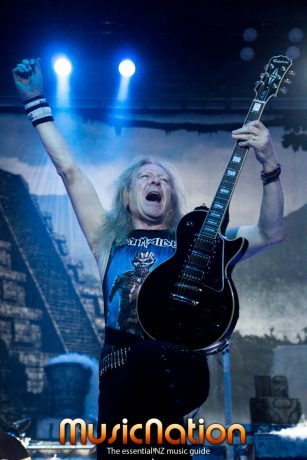 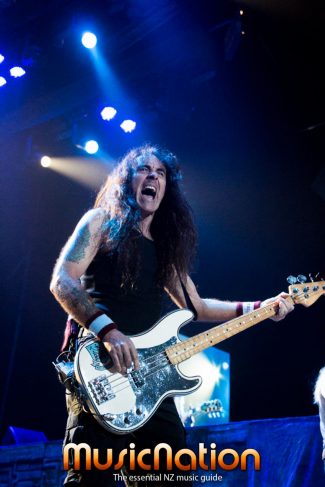 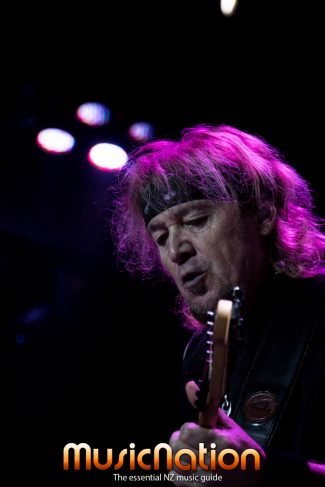 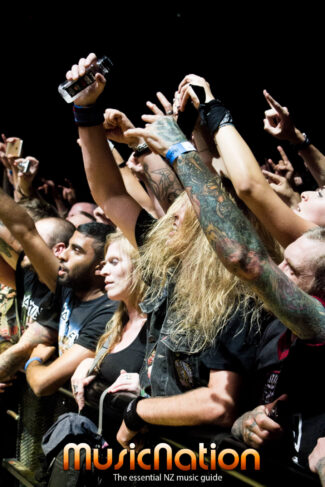 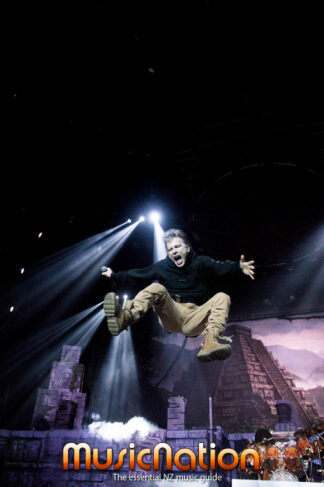 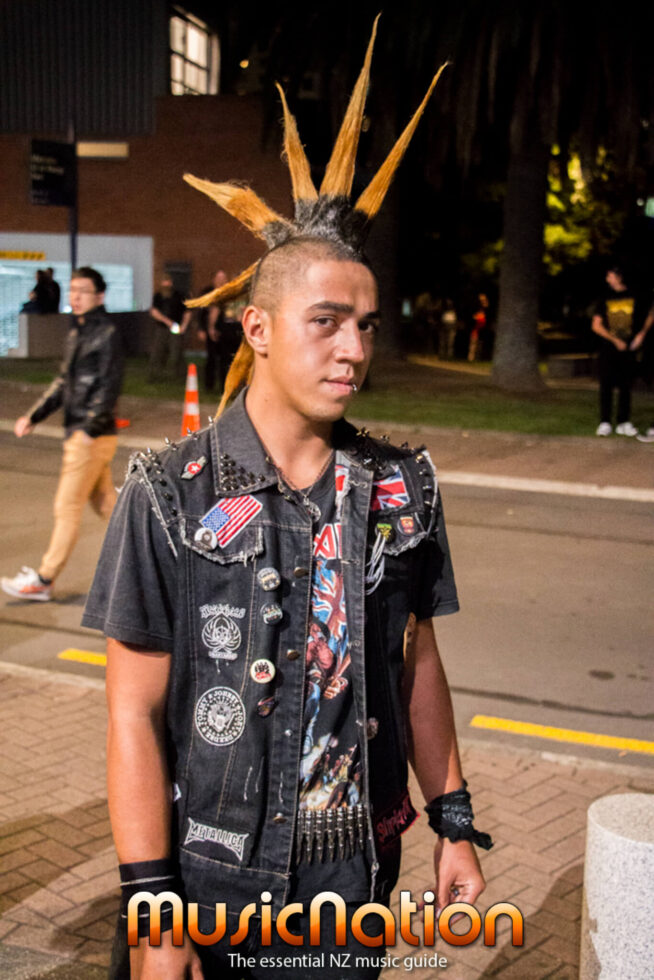 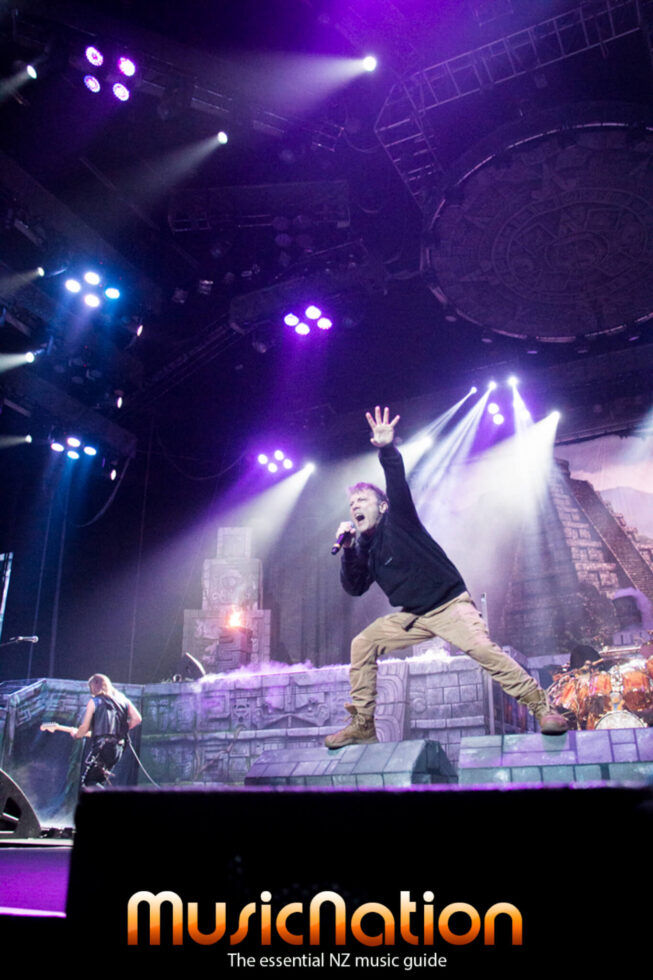 Tears of a Clown (a song dedicated to comedian Robin Williams) The Red and the Black spurred the crowd on as the Eddie background changed to the album cover of The Trooper inciting the crowd, who were happily singing along. One burly fella in from of me with All Black shirt on, stood up trying to get the crowd on their feet. As a snot-nosed teen playing the guitar you couldn’t go past the dual guitars of ‘maiden’ power duo Dave Murray & Adrian Smith. However, here they were up close and personal, picking those notes that dubbed the pair pioneers of the dual- guitar lead with songs like The Trooper or Aces High while third guitarist Janick Gers was in fine form throwing his guitar around his head and stepping over it, he almost needed his own space for his ‘Riverdance’ guitar antics.

“Empires have a lot to f**king answer for I tell ya” said Dickinson. “You’ve done the right thing, the Kiwis never bothered having an empire unless it was trees, beer, women, rugby or sheep” as the group played the title track off the album The Book of Souls, while a life-like Eddie made a surprise appearance on stage with the band, with a mock fight and Dickinson holding his pulsating heart on Hallowed Be Thy Name – great stuff. 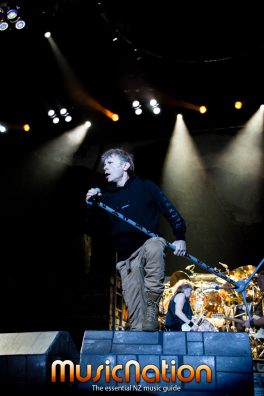 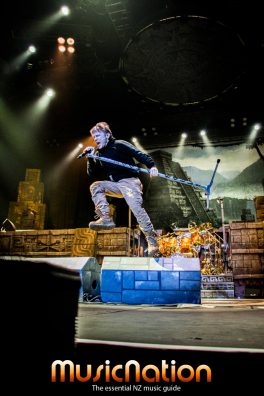 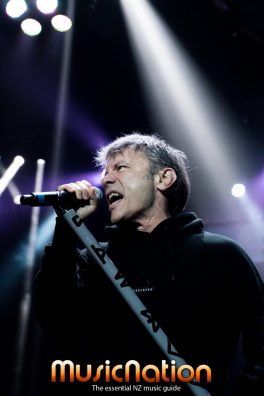 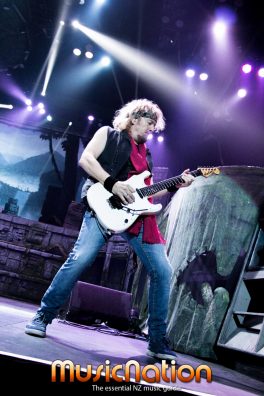 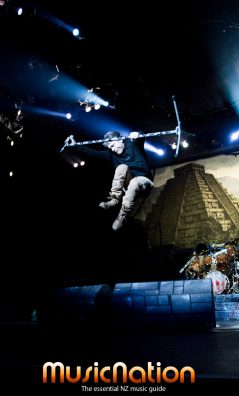 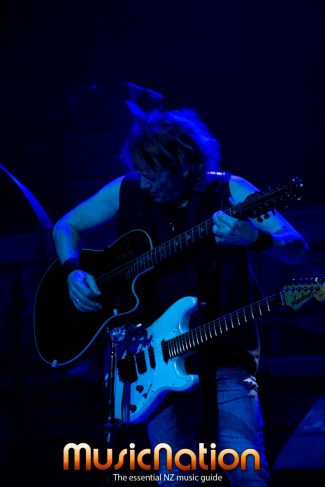 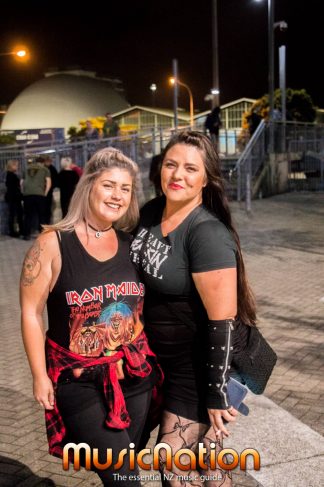 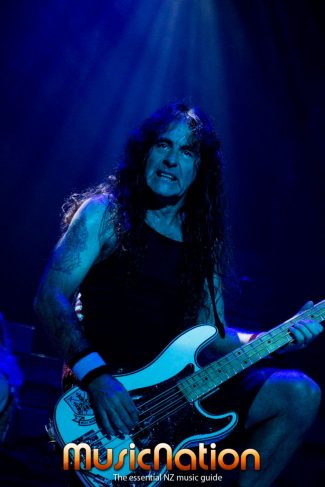 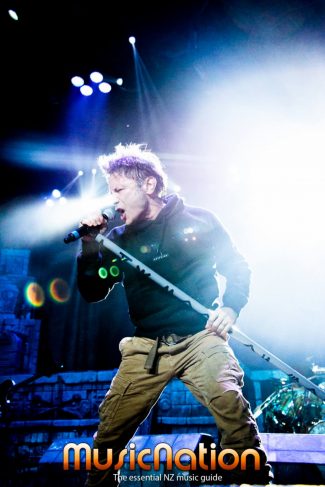 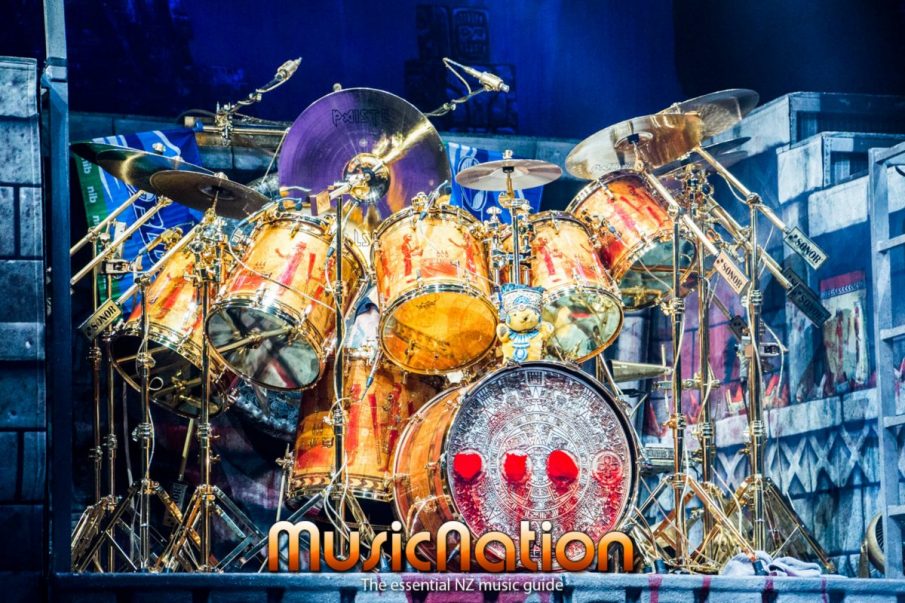 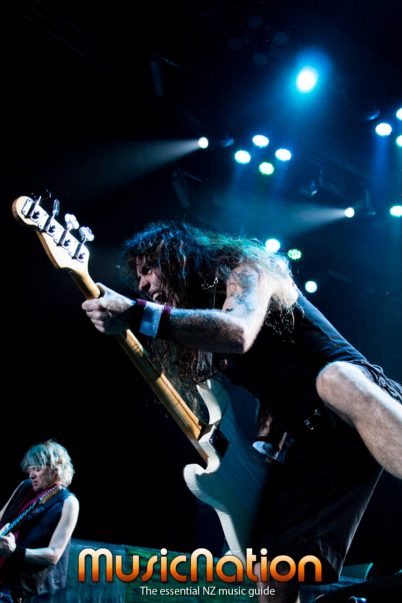 Of course, no Iron Maiden show would be complete without the looming figure giant of skeletal Eddie the pivotal and most important member of the group, but as Dickinson nicely summed it up “As long as you’re playing Iron Maiden, you’re part of the family”. And so favoritesthe throngs of surrogate siblings, concert goers happy to have made the connection – Really, everyone should have an Uncle Eddie