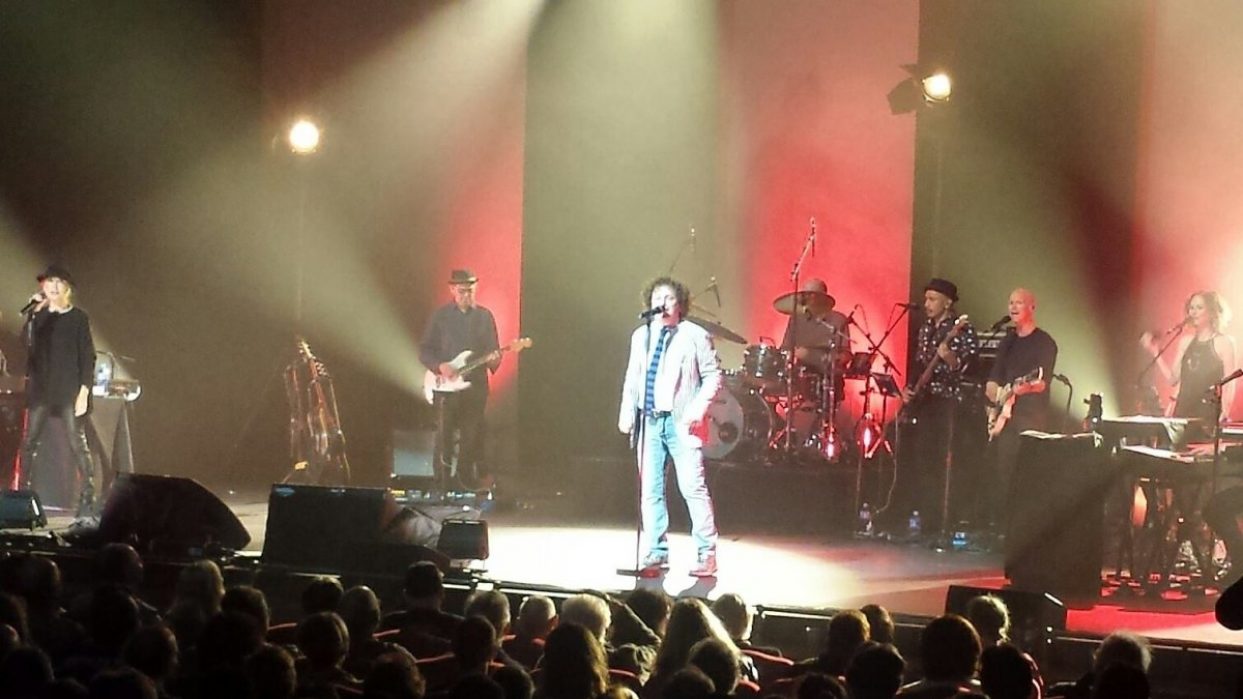 I’m quite excited because one of my childhood favourite singers of ballads and disco songs, Leo Sayer, is coming to town with one of British pop’s music icons, Lulu.

Words and photos by Jarred Tito

We’re at the Civic Theatre in Auckland and it’s the 3 o’clock show and the theatre is sold out. They’re scheduled for two shows today and Leo promises to hold nothing in the reserves for tonight but give it 150 percent right now.

I remember singing the song, ‘When I need You‘ (Leo Sayer’s version) and knowing it note for note and word for word and getting all dreaming about love. Haha. Wow! 30 years later and the sentiments are all still there.

The last time I think I saw Leo Sayer on television was when he was a guest star on The Muppet Show way back with Kermit and Jim Henson. So many years ago now during the seventies when he was making his mark as a pop star. Has he still got that voice? That incredible, almost Latin American sounding voice that saw him hitting the big notes like Freddie Mercury and Elton John at his early best.

Well, Leo and Lulu take the stage to an audience which is on their feet waiting in anticipation. They start the concert with one of Leo Sayer’s early hits ‘Thunder In My Heart‘ which they sing as a duet. My curiosity about his voice quickly answered, yes he can still sing. Lulu’s voice has matured with age. She now sports a very soulful diva’s voice. Not unlike Tina Turner (minus the Tina Turner power).

Lulu is still looking great. Aside from a few lines here and there she still looks like the girl from the seventies. She is dressed hip. A cross between Catwoman and something from ABBA. Wearing black tights and shiny heels. Her hair is blonde and she is still very attractive. Both herself and Leo are looking and sounding great. It’s hard to believe they’ve been around for 40 to 50 years. But in spite of the mileage, they both have managed to stay young.

They take turns on the stage singing their singles and Segway into duets. Leo sings, ‘One Man Band’. A song originally written for Rodger Daltrey of ‘The Who’. I remember watching the video of him years ago in concert when he was dressed up like a clown complete with white face paint. Well he doesn’t have the paint on tonight but he nails the song perfectly. Still a crowd pleaser.

Lulu takes the stage and sings a classic David Bowie song, ‘The Man Who Sold The World‘ followed by ‘Poor Boys‘.

Both Leo Sayer and Lulu are consummate performers. Not only do they handle their songs very well but they also engage the audience in many background stories to most of their songs.

Leo returns to the stage and does a couple of solos himself including ‘Beautiful Year‘,  ‘Moonlighting‘ and ‘Long Tall Glasses’. Lulu joins him and they do a couple of Rock numbers. ‘Rock Steady‘ and their own version of Elvis Presley’s ‘Hound Dog‘ which I was suitably impressed with.

It was Lulu’s time again and she spoke of her involvement with the movies. Each of the stories told by Leo and Lulu were always interesting and took you back to yesteryear when the sixties and seventies was the rage. It almost makes you feel rebellious in a weird kind of way. Like travelling in some sort of time machine which enabled us the audience to experience the seventies through the eyes of a pop star. Lulu saying one of the theme songs for the 007 movies ‘The Man with the Golden Gun’ and also played a role in the famous movie ‘To Sir With Love’, which is also the title of the Sidney Portier classic ‘To Sir With Love.’ The song was definitely one of the highlights of the concert and went down a treat with the audience.

Well, we are well into the second set and Leo takes the stage again and sings, ‘We’ve got Tonight‘ followed by ‘When I Need You‘ (my personal favourite. Pure classic I reckon lol). An excellent song to sing along to which of course Leo gave the audience an opportunity to do just that. It was quite a treat hearing the crowd of 2000+ people sing it word for word. I think Lulu and Leo, who did the song as a duet, were suitably impressed with the Auckland vocals.

Lulu led the encore with, ‘Shout‘ and Leo Sayer closed it with that toe-tapping disco classic, ‘You Make Me Feel Like Dancing‘.

An excellent time out which I enjoyed thoroughly. The Civic Theatre has once again proven that it is a superb location for music concerts. The acoustics are great.