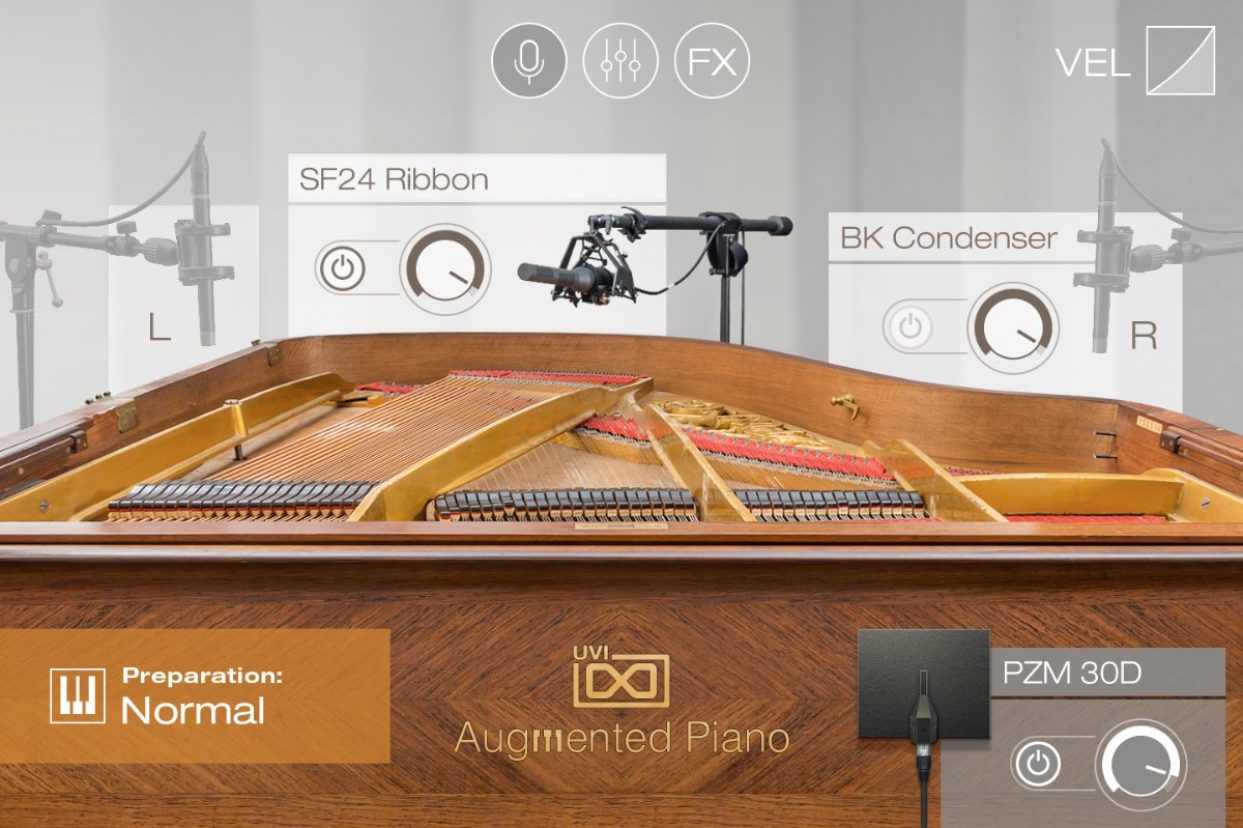 Paris, March 15th, 2018 – UVI releases Augmented Piano, a one-of-a-kind piano workshop including 24 configurations recorded on a 1909 Pleyel Grand Piano. Full 88-key preparations cover the gamut from brushed, finger-plucked and muted preparations to haunting eBow resonances and brilliant metallic sounds by way of tacked hammers. Augmented Piano provides an inspiring range of sonic territory from beautifully recorded traditional piano to new, eclectic and avant-garde tones ready to breathe life into your compositions by taking the sound of the piano further than it’s ever been. Deep onboard sample controls and numerous effects combined with 3 fully-mixable mic sets, including a pair of condenser mics, a stereo ribbon mic and a floor-mounted PZM mic, provide tremendous flexibility and total control over your pianos sound. A complete instrument workshop, Augmented Piano delivers sounds impossible to make with any other piano library, from incredible ready-to-play presets to a world of sound design potential.

Augmented Piano provides musicians with vast, new and inspiring sounds from an instrument they already know and love. The result is a collection of 24 unique preparations, some available for the first time in a virtual instrument, each with their own distinct tonal shape and character, from bell-like timbral augmentations with tacked hammers to radical sustains by way of bow and eBow, to percussive sounds from brush and stick strikes to plucks with a guitar pick and finger. The variety of sounds possible in Augmented Piano can inspire many new and creative ways of using piano in your songs that wouldn’t normally be possible, and by utilizing the multi system in UVI Workstation or Falcon users can even layer the provided preparations to create rich and varied hybrids that would be impossible in the physical realm, for example combining the attack of a metal stick or brush strike with the sustain of a bow or eBow.

Augmented Piano provides a staggering library of over 23,000 samples that are losslessly streamed while playing, providing a remarkably warm and lifelike image without heavy CPU usage or disk load. Discrete control is provided for release volume, sympathetic resonance volume and pedal volume, along with more creative controls such as multimode filter, ADSR envelopes for filter and amp, tone and portamento. Finally a capable effect sections provides high-quality finishing by way of IR, drive, 3-band EQ, chorus, phaser, delay and reverb.

Augmented Piano offers native 64-bit standalone operation by way of Falcon or the free UVI Workstation, providing comprehensive support for all modern DAWs and simultaneous authorization on up to 3 computers or iLok keys.